Each sport has a king – the title honoring the best individual in the history of that sport. And it wasn’t until the 1990s that the NBA officially found the king of basketball – Michael Jordan.

In the 1990s, Americans always nodded proudly when they owned three great Mike: Mike Tyson of boxing, Michael Jackson of the music industry and of course Michael Jeffrey Jordan of basketball. For the NBA and basketball fans, Michael Jordan is the king and the most influential person in the NBA tournament today. He did not change the game just by talent and strength. He combined them with his competitive spirit, and that turned Michael Jordan’s name into a definition of greatness.

Of course, those who love Air Jordan & Michael Jordan, and the culture of sneakers all know Air Jordan 1, the shoe that was launched in 1985. The shoe is famous for one of the NBA’s stories of forbidding the use of the colors of Black / Red / White shoes at the time. However, Nike & Michael Jordan then accepted to pay a fine to bring the shoe to the field.

Air Jordan 1 “Chicago” has become one of the legendary color schemes and has been extremely popular worldwide since then until now. Nike also regularly releases several “Chicago” Air Jordan 1 editions and of course, are very much sought after, especially for limited or special editions.

Sothebys – A unit that specializes in auctioning the most rare and expensive sneakers on the planet has launched special sneakers associated with the events of Michael Jordan, Chicago Bulls club and Nike brand. 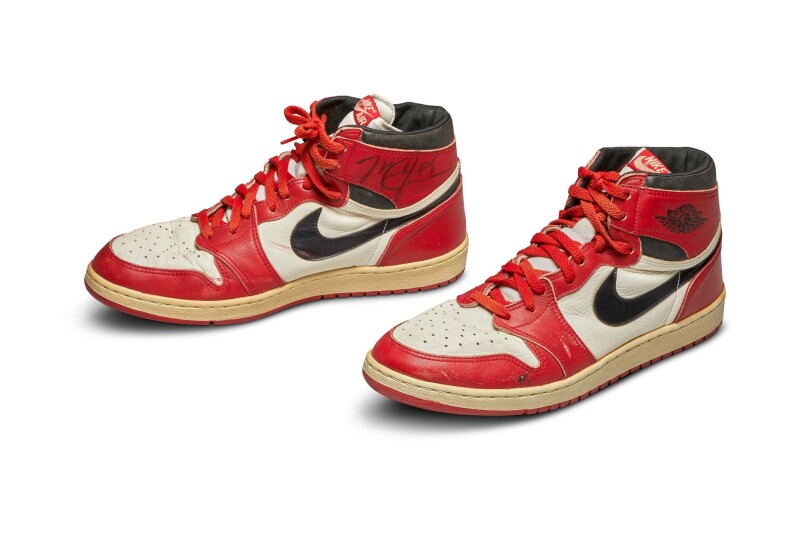 Soletheby also auctioned Nike Moon Shoe for up to 437,500 USD and now Air Jordan 1 pairs that Michael Jordan used when playing for Chicago Bulls and was officially launched by Nike in 1985 .

In addition to the value of the history, that it is the first shoe Michael Jordan wore on the foot of the competition and the signature of Michael Jordan made the shoe more expensive than ever. The fact that Netflix has also completed the documentary and is streaming the episodes of THE LAST DANCE also increased the promotion for the 1985 Air Jordan.

The documentary tells the story of the legend of Michael Jordan and his Chicago Bulls teammates in the 1997-1998 season, when they won the “Treble” for the second time and was the 6th championship in the player’s career. Currently, you can watch Season 1 – The LAST DANCE. In each episode, you will better understand Michael Jordan through each match, the level of emotions as well as many moments that made up the history of Air Jordan, the sneakers that the idol wore on his feet.

It is unknown whether Nike is behind the cooperation to produce this movie with Netflix and NBC or not. But this is a very important and strategic step because Netflix’s influence globally is being strengthened. The “Chicago” Air Jordan 1 shoes cost over US $ 1,500 depending on the size. If you want to own it, hurry. Or wait for a while when THE LAST DANCE cools down and then buy it.

Surely those who love Michael Jordan or the orange ball are looking forward to watching the next episodes. Please do not forget to follow the series.

(How many shoes does Nike sell a year?: https://shoesops.com/how-many-shoes-does-nike-sell-a-year)

If you love sneakers and sometimes wonder how sneakers were born, who designed them, where the design inspiration came from, then an episode of Tinker Hartfield – Nike’s designer will somehow answer you. Tinker Hartfield is someone who almost all sneakerheads know. Famous and legendary products such as Nike Air Max and Air Jordan XI appeared in this episode. In addition, Tinker Hartfield’s philosophy of life is applied to design in a very good way and we can learn a lot from it. Please do not ignore it.

In fact, every time I watched Kanye West interview, I got goosebumps. Kanye West has so much energy and determination through every word. Whether he is hated or loved all over the world, I really think Kanye West is worth learning from because of the spirit of advancement, the difference and the creativity in fashion as well as music. We know that Letterman is so great. if anyone follows Letterman, he/she knows that he is a cult in the Late Show of America. He is aged but very witty, sophisticated and full of charm. This is an episode among a lot of different episodes worth watching.

Although Travis Scott has received a lot of criticism from the music community through to fashion, the influence of Travis Scott on the culture of sneakers across the globe is indisputable. The title “LOOK MOM! I CAN FLY” really carries a great emotion. The film goes back to the past when Travis Scott started his journey with his family, which served as a foundation for his career development. Travis Scott has brought in a power of imagination and creativity. Remember to watch it all! Don’t miss it on Netflix or you can watch it on YouTube.

As a passionate fashionista – especially passionate about shoes, I consider fashion as not only beautiful and expensive shoes but also breathing for my everyday life.