If you ask Adidas fans about which items are indispensable in their closet, don’t be surprised to find these “over-50-year-old” shoes on their lists. Classic Adidas Superstar shoes have never ceased to appeal to any generation.

The first milestone was in 1965 when the Adidas shoe company targeted the basketball shoes market and launched Supergrip – the precursor of Adidas Superstar shoes.

In 1969, the first Superstar Adidas shoes were released. When they were first produced, they were designed for basketball players with the entire upper being made of leather and the toe being as hard as a shell. Later, such toe became an unmistakable exclusive symbol of the shoe called Adidas Superstar.

Thanks to the special design of the shoe toe that was able to protect the user’s toes in the best way, Superstar Adidas shoes quickly attracted the attention of some of the best players. That is why Superstar shoes were quickly spread to everyone from the courts to the schools and the streets.

Adidas Superstar is a rare shoe model that you do not see the appearance of new shoe designs. Although there have been many versions of Adidas Superstar shoes, it was only a change in color or texture while the design has remained the same.

Why is Adidas Superstar popular?

The history may have revealed a part of why Adidas Superstar shoes have attracted the hearts of sneaker fans and became famous throughout the world for many years. But that is not all.

Admittedly, the popularity of Adidas Superstar shoes is partly due to the fact that they are used by many famous stars. Many stars give a lot of endorsement to Adidas Superstar and this shoe line is even considered to be more loved than Adidas Stan Smith.

However, without the high quality, the shoes would quickly be eliminated from the market. In other words, if Adidas Superstar shoes are not really comfortable and do not own high-class and luxurious materials as well as a perfect appearance, it is impossible for Superstar to be loved by many celebrities.

When you own a pair of shoes that are popular all over the world, especially among famous celebrities, there’s no way you don’t refer to some combination of these shoes with different clothes to own a style.

The basic rule to keep in mind is mixing Superstars with dark or white clothes because Adidas Superstar shoes have a white tone with some other textures. Thus, when combined with dark colors, the shoes will become accentuated by their bright colors. When combined with white clothes, the textures on the shoes will become a highlight. By mastering this rule, both men and women can own a trendy style.

Here are some schemes that apply the above basic rule.

Mixing with skirt or dress

Don’t think that a skirt or dress cannot be combined with a pair of sneakers. Actually, the combination can give you an impressive appearance far beyond your expectation.

Perhaps no one is unfamiliar with this simple coordination style anymore because T-shirts/ shirts & jeans are so popular.

Mixing with baggy pants and T-shirts for office workers

Baggy pants are now one of the most sought-after outfits, whether for going out or working, because baggy pants are comfortable but still bring the formal and polite look for the wearers.

How to distinguish genuine and fake Adidas Superstar shoes

With today’s advanced technology, the appearance of fake Superstar shoes is really not rare. Therefore, shoe lovers always want to find out how to distinguish between real and fake Adidas Superstar shoes.

Here are some of the easiest and fastest ways for you to quickly determine if the Adidas Superstar shoes you are going to buy are genuine or not.

First, any genuine pair of shoes that was manufactured and distributed by Adidas has a box with accessories inside. If you don’t have a shoe box and shoe wrappers inside, these shoes are definitely fake ones.

However, many shop owners order shoe boxes like genuine and put fake shoes inside. However, you can still tell whether they are genuine or fake shoes based on shoe stamps. Shoe stamps will be printed on both the shoe tongue and the shoe box. These two stamps must be the same and have a clear barcode.

Another feature that you can check is the shoe lining. Genuine Adidas Superstar shoes have linings sewn with the soles and each seam is even and tidy. Meanwhile, for fake shoes, shoe linings are glued to the soles and can be peeled off; they can be sewn but the seam is very messy and uneven.

How to store and clean Adidas Superstar shoes

Although genuine Adidas shoes are very durable, the preservation and cleaning of the shoes are still very important so that you can extend the life of your shoes. Here are three fast and simple ways.

Use a wet towel

Due to regular use, it is inevitable that your shoes will have stains and dust. The upper part of the Superstar Adidas shoes is made from an easy-to-clean material, so you can easily wipe off the dirt with a wet towel.

Keep the shoes in a cool place

Regardless of what is kept in the humid place or under the harsh sunlight, it is easily damaged. Therefore, when you’re done using your shoes, store them in a well-ventilated and shady place. Keeping the shoes in a cool place also helps the sweat left in the shoe to evaporate faster and the shoes become less moldy. After each use, you can put tea bag filters or desiccant sachet inside your shoes to dehumidify the shoes and deodorize odor.

In fact, washing the shoes is not recommended because much contact with water and detergent can make the shoes more damaged. However, washing the shoes is still necessary to keep your shoes fresh and it is also a way to protect them. Your Adidas Superstar shoes, even genuine, will not be durable if they are covered in dirt and mold. For slippery material like what Adidas Superstar shoes are made of, there is no need to worry too much about how to wash the shoes because it is the “easiest” material in cleaning job.

To wash your shoes, you just need an old unused toothbrush and a bit of toothpaste. Using toothpaste will help clean stains faster and keep the shoes bright and shiny. Toothpaste can be replaced with diluted shampoo or shower gel. It is best to avoid using detergent because detergent is quite strong, which will affect the leather material. Moreover, washing powder is often the main cause of white shoes stains if washing powder residues are not rinse out. Gently brush the inside and outside of the shoes. Rinse the shoes with water. Do not directly rinse the shoes under the running hose or soak them too long in water.

After washing, shake off the water in the shoes. You can wrap the shoes with a layer of white paper to reduce stains. You should dry the shoes in a cool place. Avoid direct sunlight and absolutely do not use a dryer. 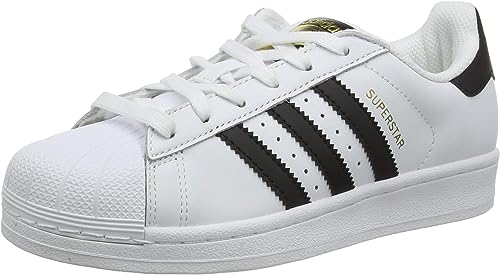 Check Price and Rating on Amazon

As a passionate fashionista – especially passionate about shoes, I consider fashion as not only beautiful and expensive shoes but also breathing for my everyday life.